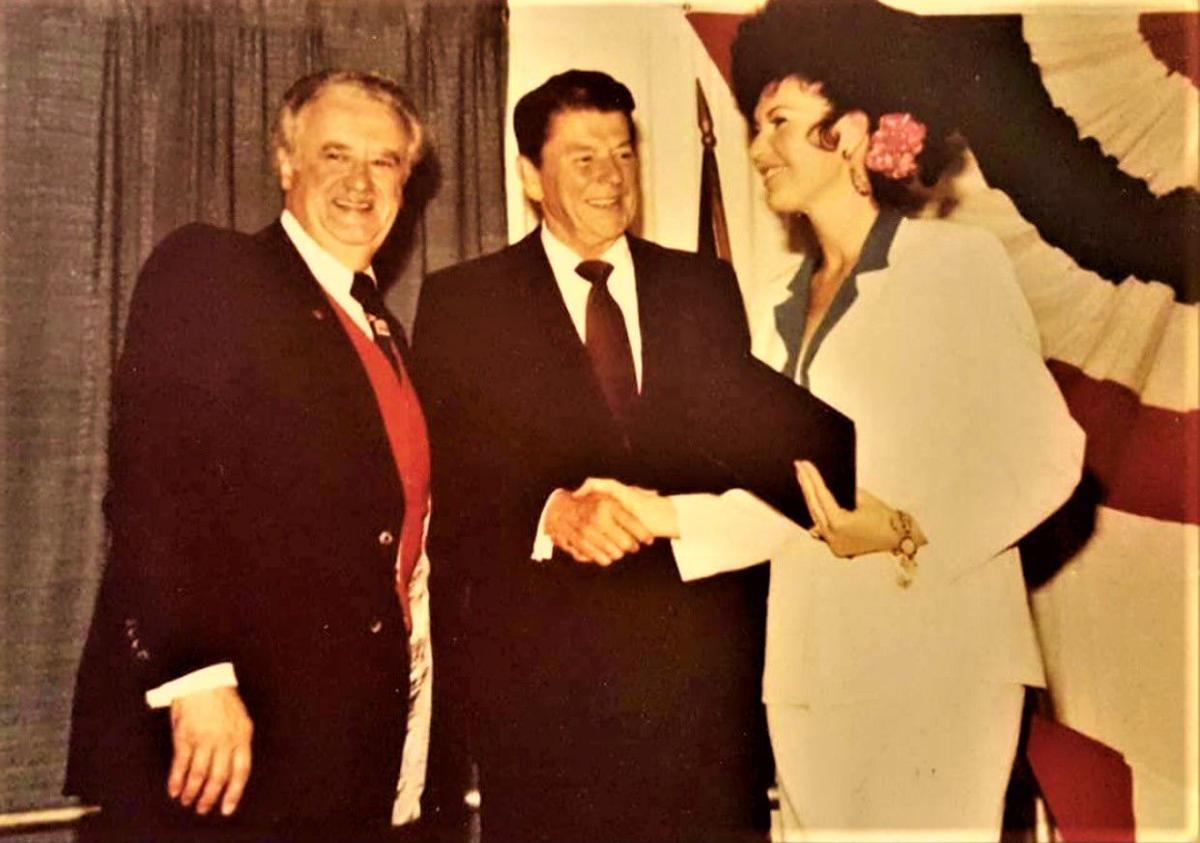 Passionate about politics, Mrs. Wisconsin turned local realtor Joyce Leffler, right, hosted a procession of local, state and national political candidates at her Racine home while they were on the campaign trail in the Milwaukee-Racine area. In this photo she's receiving an award from President Ronald Reagan, center, for her efforts in support of his successful 1980 campaign. Pictured at left is Lee Sherman Dreyfus, Wisconsin's red-vested governor from 1979-83. 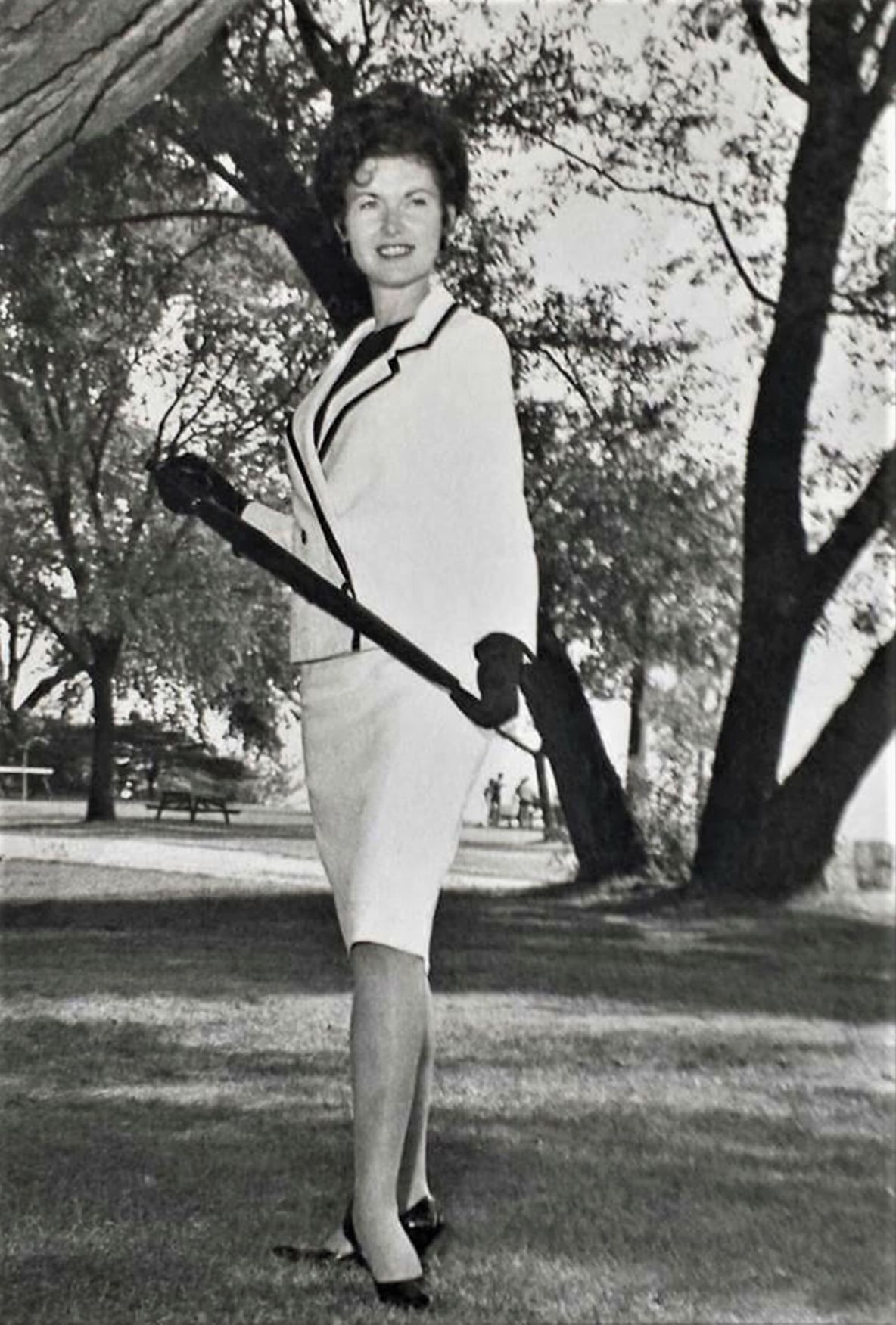 A professional commercial model early in her career, Joyce Leffler made appearances at local fashion shows sponsored by the Elmwood Plaza shopping center, and a variety of local retailers, including Downtown Racine women's clothier Eitel's.

RACINE — Much can be said about Joyce E. Leffler, fondly remembered in the community as a headlining former Mrs. Wisconsin, a realtor, community pillar, political fundraiser and friend to all with whom she crossed paths.

“Joyce had a charm, wit, and undying love to those who were her friends and family,” her children said in an email following her death on Nov. 5 at age 85 from COVID-19. “She was simply an amazing mom, filled with a zest and zeal for life, all bundled up into one marvelous package. She was the first to compliment a person and make them feel good. This included family and friends – and even total strangers. Seeing others smile provided her great joy. She loved giving gifts to her family, and even strangers. She was just that kind of person.”

A native of Milwaukee, Joyce Elaine Doro graduated from all-girls Catholic high school St. Mary’s Academy, then earned a bachelor of science degree from Marquette University in 1957 with majors in psychology and philosophy, later studying for her master’s in psychology at the University of Wisconsin-Milwaukee.

Married at 22 in 1957 to Racine resident Clark D. Leffler, a World War II U.S. Navy veteran and a native of Marquette, Mich., the Lefflers would be married for 32 years and have four children — Ray Leffler of Racine, Cathy Leffler-Cimoch of Franklin, Michael Leffler of Yorkville and Thomas Leffler of San Juan Capistrano, Calif. A veteran trucking executive with Express Freight Lines in Racine and later Expedited Freight Systems in Kenosha, Clark Leffler died at age 85 in April 2013.

For her four children, remembrances of Joyce center around her “selfless love” as “a dedicated mother first and foremost” who “was all about family” at “the core of who she was.”

“She was a wonderful, fun-loving mother who had a sparkling personality, infectious smile and an incredible heart,” recalled Michael, a personal injury attorney and co-founder of Action Law Offices, S.C. “She was always there to listen and console. She offered great wisdom and advice. She promoted a spirit of adventure. She was intelligent and well-read. Above all, she was unendingly generous and loving. Her charm, elegance, beauty and compassion endeared her to everyone. She was always smiling, always happy, always doing things for people. It was always her goal to make people happy, paying random compliments to people.”

Possessed of a “thirst for knowledge,” Joyce was remembered by her children as a voracious reader who “relished the opportunity to absorb … facts from books, newspapers, magazines and the Internet.”

“She did not like to go to bed at night without having learned something,” they recalled, noting Joyce “had a fierce allegiance to The Journal Times” as a “cover to cover” reader with a complete home archive of Journal Times back issues dating back to the 1960s for her reference.

And for Joyce, family extended beyond blood lineage. Humankind was her family.

“She extended the family,” Michael noted. “Random strangers. She’d meet people and invite them over for dinner.”

Recalled Ray, “We’d always have all kinds of new people at dinner because she would just befriend somebody and invite them over, It could have been anybody. I can think of a half-dozen people right now.”

Among the strangers turned family was a longtime Journal Times staff photographer, the late Art Haas, who was brought into the Leffler family fold when Joyce and Haas met by chance “out of the clear blue.”

“He took me under his wing and used to take me to different photo shoots for sporting events at the high schools,” Michael recalled of Haas, who passed away in 1982. “He gave me a camera and taught me how to take pictures.”

Cathy — relocated back to Wisconsin eight years ago after 25 years away pursuing a career in broadcast news in Alaska, Texas and California, and now working as director of marketing and new business development at Plastic Parts, Inc. — recalls how her mother balanced taking care of her family with her deep involvement in area educational, community, social, political, business and philanthropic pursuits over the years.

“I was just so in awe of her,” said Leffler-Cimoch, a mother of 21-year-old quadruplets and 15-year-old twins. “She had so many opportunities in her life. I just marvel at what she accomplished in the community.”

“I was amazed how she could do all these things – family, community leader,” he noted. “She was pretty remarkable.”

Encouraged to “go fly” and spread her professional wings with Joyce’s “150% support,” Cathy welcomed the opportunity to return to Wisconsin to share her mother’s last years.

“I think it was part of God’s will for me to be here the last eight years,” said Cimoch. “The time was incredible for me. It was a gift.”

Joyce was crowned Mrs. Milwaukee in February 1964, then Mrs. Wisconsin the following month. At that time a 28-year of mother of three — Raymond, then 5; Cathy, 3; and Michael, 8 months — in addition to being a professional commercial model and dance instructor, her coronation as Mrs. Wisconsin started her journey into the world of public speaking, community service and fundraising.

Your membership makes our reporting possible.

Joyce’s role as Mrs. Wisconsin also enabled her to share her keen eye for and love of fashion in the Racine-Milwaukee area, where she chaired numerous runway events, many of which served as fundraisers for area charitable organizations and high schools.

Equally passionate about politics, Joyce over the years hosted a who’s who procession of local, state and national political candidates at her home while they were on the campaign trail in the Milwaukee-Racine area. Additionally, she was active in planning campaign events in support of various mayoral, Senate and gubernatorial candidates, as well as party and campaign fundraising efforts that saw Joyce receive an award from President Ronald Reagan for her efforts in helping his 1980 campaign.

“There would be George (H.W.) Bush on the phone, Ronald Reagan, Bob Kasten, Senator Bob Dole,” Michael recalled. “She would be heading up the campaigns in Racine and taking them around when they would come into town. It was quite incredible to be in high school, answer the phone, and have all these people on the phone. I didn’t appreciate it much at the time, but as I get older it’s like, ‘Holy cow!’ She was quite active and involved.”

Joyce would be appointed by Governor Tommy Thompson to serve on the Wisconsin Parole Commission, which serves as the final authority for granting discretional paroles or early release from prison.

Active in educational circles when her children where school-aged, Joyce is most notably remembered for her pioneering role in writing and implementing a sex education curriculum for the Racine Unified School District and the State of Wisconsin, working closely in the early 1980s with RUSD Superintendent C. Richard Nelson and state Department of Public Instruction Superintendent Herbert Grover.

“She basically wrote the Sex Ed curriculum for Racine, which was really controversial at the time,” Michael recalled. “There were protests because people didn’t believe sex education belonged in the schools; you should teach it at home. She pushed hard to have sex education in the schools.”

Following the lead of RUSD and the DPI, Cathy noted that “many communities in the state then started adopting” the sex ed curriculum that Joyce developed.

Closing out her working career, Joyce logged more than 25 years as an Realtor for her son Ray at Re/Max Newport Realty, formerly ERA Newport Realty, where her legendary generosity extended to her clients.

On numerous occasions, Joyce would waive her commission because she found “the perfect house” for a couple who could not otherwise afford to purchase the home. On other occasions, she gave up most of her commission to buy a washer and dryer set for cash-strapped homebuyers, presenting the appliances as housewarming gifts.

“There’s countless stories where she helped people get into houses by giving up her commissions,” Ray recalled. “All the time she was doing stuff for her clients … way beyond what people would normally do.”

Moved to a Muskego senior assisted living health-care facility 18 months ago, the March arrival of the pandemic in Wisconsin saw Joyce physically distanced from her family as the facility locked down to protect the health of residents, with Joyce’s visitations with her children, 15 grandchildren and two great-grandchildren pivoted to near daily phone calls, twice-weekly Zoom calls and more than 50 window visits for the last eight months of her life.

“It was very disheartening,” Ray said of the physical separation. “It was a tough way to do things.”

“You think — eight months without having your family hug you and only strangers around you,” she said, noting Joyce never got to hold her great-grandchildren. “That had to be incredibly lonely. That’s what gets my heart — these were the prime years of her life to be with all of us. She was robbed of those times. That was hard.”

After Joyce contracted COVID as the virus struck 30 of the assisted living facility’s 32 residents, the family pushed for a full personal protective equipment (PPE) compassionate care visit, which was denied. A visit was finally approved 3 hours before Joyce passed away, on the 11th day of her battle with COVID as her condition significantly worsened. Joyce was only able to acknowledge her family’s presence at her bedside by moving her lips.

“It was really a tough situation,” Michael said. “You understand why they’re locking down, to keep the virus from getting inside these facilities, but you have so many of these health-care workers doing different things outside … and then going to work, where families are locked out. It’s really troubling. It’s frustrating.”

Ray said the family is “grappling” with Joyce’s tragic if peaceful passing, “moving forward” to carry on her legacy of caring, compassion and community service.

Said Michael: “She was a wonderful soul.”

‘YOU ARE INCREDIBLY SAFE TO GO OUT'

Swinging on a closed swingset

BACK IN ACTION, WITH A MASK

Capping off the globe

Getting out the vote efforts

MASK UP TO BALL

BEGINNING OF THE END